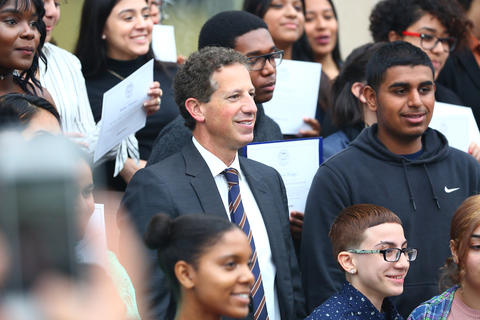 For more than 25 years, Marc Jerome has been a driving force behind Monroe College, a national leader in educating urban and international students. The 87-year-old institution is well-known for delivering some of the country’s best outcomes for first generation and low-income college students.

Working in the Bronx, Mr. Jerome recognized that too many students who start college do not complete their programs and earn their degrees. He is a passionate advocate for policies and programs that result in excellent outcomes for low-income students. Mr. Jerome is recognized for his expertise on college completion and affordability, and the related topic of student debt. He believes that higher education simply can do better, especially with the right policies. He has long championed the need to reduce unnecessary higher education borrowing.

After practicing labor and employment law in New York City, Mr. Jerome joined Monroe College in 1994 as Director of Administration, representing the third generation of the Jerome family to work at the College. In 1996, he was promoted to Vice President and Director of the New Rochelle campus, building it into a robust, multi-cultural, urban campus in the city's downtown area.

He was appointed the College’s fourth president in January 2017.

Mr. Jerome volunteers his time on a number of Boards. He has been the Chair of the New Rochelle Business Improvement District since 1999. For 10 years, he was the Chair of the Alumni Relations Committee at the Dwight Englewood School in Englewood, NJ, and is a Board member of the Westchester County Association, as well as the New York-focused Association of Proprietary Colleges.

In 2018, Governor Cuomo appointed Mr. Jerome to the Board of Trustees of the Higher Education Services Corporation (HESC), following confirmation by the New York State Senate.

He and his wife, Helen, have three daughters.